Posted on November 30, 2017 by gravelyspeaking 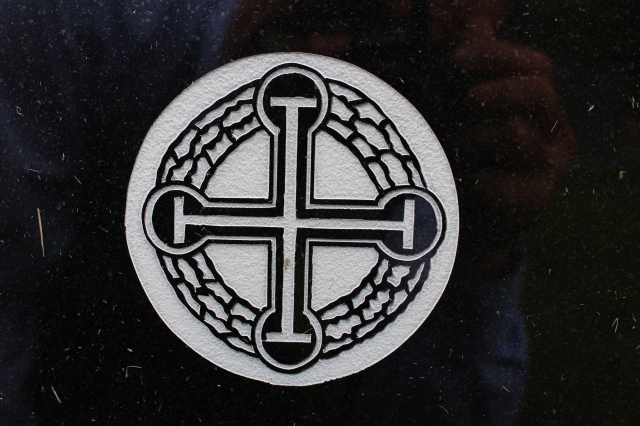 The symbol carved into the black granite gravestone in the St. Nickolas Ukrainian Catholic Cemetery in Chicago is of a cross surrounded by a wreath.  This cross is known as a cross potent or crutch cross.  It is a heraldic cross with bars of equal length with crossbars at the four ends.  These crossbars were also known as “crutches” or “potent” which is from a bastardized version of an Old French word “potence” which meant “crutch.”

This form is also described as a cross made of four Tau crosses and still referred to as a Cross Potent.  The Tau cross looks like a capital “T.”  Some believe because the Cross Potent is made up of Tau crosses, which look like crutches, that it represents the healing power of Jesus Christ. In 1191 Emperor Henry VI formed the Teutonic Order using the Cross Potent as its symbol.  The order was founded as a hospital order.