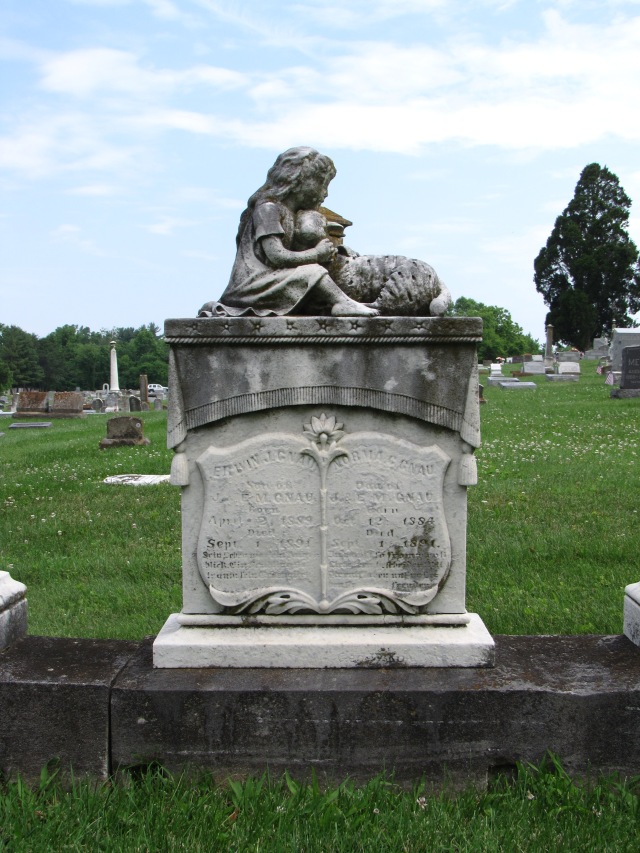 The sweet carving of a little girl hugging a lamb atop the highly-ornamented white marble gravestone in the Greenwood Cemetery at Tell City, Perry County, Indiana, marks the grave of Erwin and Norma Gnau. The sweetness and serenity of the sculpture does not hint at the tragedy of their painful and untimely deaths.

The September 2, 1891, Wednesday Edition of the Evansville Courier, screams the headline, SEVEN ARE DEAD that tells the sad story:

“A Traveling Man Tells of the Scenes and Incidents That Followed the Disaster.

The death list of disaster Monday on the Cannelton branch of the Air Line road has been increased to seven. The correct list of fatalities are as follows:

The home of John Gnau , in Troy, is one of mourning. The wife was terribly scalded by escaping steam. She suffered intense agony and the physicians pronounced her case hopeless. She lingered in intense suffering until yesterday morning, when death came to her relief. Little Irwin Gnau died shortly after being taken home and little Norma Gnau, a bright little girl, was also so badly burned that she died yesterday. Three bodies now lie in the house made desolate by death….

Engineer App arrived in this city yesterday by boat. He went at once to his home and is not badly injured, beyond a number of burns and bruises.

A force of men are at work at the scene of the wreck and at last account it was nearly cleared. The engine is badly damaged.

WAS AT THE WRECK

A Description of the Scene Following the Disaster.

Mr. Schroeder, a travelling salesman, arrived in the city yesterday from the scene of the disaster. To a COURIER representative Mr. Schroder, while at the Lottie, told what he saw of the wreck. He said that he was near Troy when he heard the engine whistle for brakes. He did not hear the crash, but soon learned that the wreck had occurred. He hastened to the scene and arrive a half hour later it had occurred. All had been removed from the fated coach, which was then a smoldering wreck. The wreck occurred on one of the worst curves of the road. Mr. Schroder made an examination of the rails and found that for some distance pieces were cut out at regular intervals. This went to show conclusively that a flange had broken. The notches in the rails were so large that a finger could be placed in the depression. The point where the engine trucks climbed the rails was plainly discernable.

Mr. Schroder said that when the passenger coach followed the engine into the ditch the front end was shoved in. The smoking apartment, occupying about one-third of the car, was in front. In this were a number of gentlemen. When the coach landed on top of the aperture made in the front of the car. One was Editor Bott of the Tell City Anzeiger. Another was Mr. Kasser, at traveling man, who is large and fleshy and has but one arm. The third was a man whose name is unknown. All three found themselves in the ditch among the wreckage….

The death chamber was near the partition in the car. Here Miss Nemer last her life. She was sitting near the partition and was caught in the wreckage. The engine was immediately beneath. The steam pipe leading to the whistle broke and the unfortunate young lady was roasted to death. Mrs. Gnau and her children was sitting near Miss Nemer and they also received the full steam from the engine….”

According to the article on the Find-A-Grave site for Emma Gnau, mother of Edwin and Norma, as she was being carried out of the train car in terrible pain blinded by the steam injuries she pleaded with those around her to save her children. She, nor her children survived the accident. Emma, a 38-year mother was laid to rest next to two of her children after a requiem in the St. Pius Church of Troy. She was survived by her husband, John, and her son, Oscar.

Nearly three weeks later, after investigating the accident, the county coroner came forward with his assessment of the accident which was reported in the September 20, 1891, Sunday Edition of the Evansville Courier. The paper ran the headline, “THE AIR LINE WRECK” and sub headline, “Coroner Cluthe’s Verdict Censures the Railroad Company”.

CANNELTON, IND., Sept 19—[Special]—Coronoer Cluthe’s verdict in the late disaster, wherein eight people were killed on the Air Line five miles west of this place, reads about as follows:

“I further find the point where the accident occurred was on a high curve without sufficient grade on the road-bed. I will also censure the company on the high rate of speed called for in the schedule time.

“I also found rotten and broken ties near the place of the wreck.”

According to the coroner, the railroad itself had been at fault for the accident that shattered the Gnau family forever. The little girl and the lamb are reminder of the innocent lives lost that day leaving no hint of the tragedy that caused their deaths. The lamb is the symbol of the Lord, the Good Shepherd. It also represents innocence, likely the reason why this motif almost always adorns the tombstones of infants and young children.

2 Responses to The Train Wreck