In Service of His Country

Posted on February 7, 2016 by gravelyspeaking 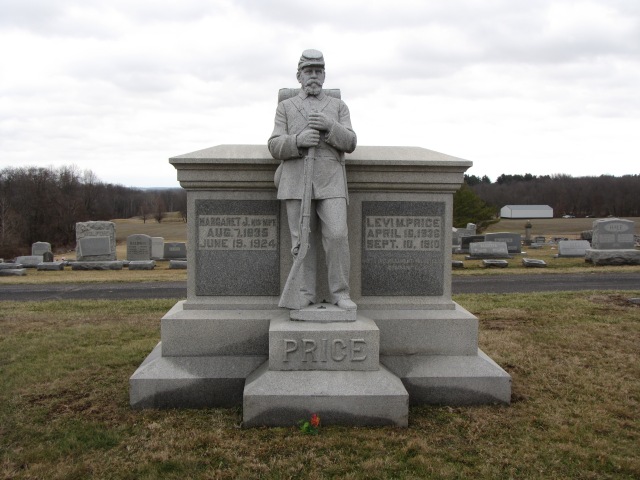 The monument in the Fairview Cemetery at Linton, Indiana, created for Levi Moss Price and his wife, Margaret Jane features a life-size granite statue of a Union soldier. According to Civil War Sites, Memorials, Museums and Library Collections: A State by State Guidebook to Places Open to the Public written by Doug Gelbert, the Union soldier is “standing at parade rest” and “was sculpted by Wilbur Wright Marbler”.

The Green County, Indiana with Reminiscences of Pioneer Days, Volume III, published by B. F. Bowen & Company, Indianapolis, Indiana (1908), gives a brief but informative history of Levi Price:
“Among the children of Aquilla Price was a son by the name of Levi M., whose birth occurred in Greene County, Indiana, in the year 1836, and who has been proud to call this section of the Hoosier state his home from that date to the present time. In his young manhood Levi Price married Margaret Hail, daughter of the Rev. Martin and Phoebe (Hickle) Hail, the father a popular minister of the Methodist Episcopal Church during the pioneer period in Greene County and a leader in religious affairs wherever his labors called him. He spent his declining years in Linton, where his death occurred at the advanced age of eighty-nine years, his faithful wife having also neared the century mark when summoned to the unseen world. Levi Price became one of the prominent farmers and stock raisers of Greene County, and after accumulating a handsome competency, retired from active life to enjoy the fruits of his labor and thrift. On the 27th day of October, 1907, he and his good wife celebrated the fiftieth anniversary of their marriage, on which occasion there assembled at their home in Linton, two hundred and fifty-five guests tow wish the worthy couple many returns of the memorable day and to rejoice with them in view of the many signal blessings by which their pathway has been best. Since retiring from active life Mr. and Mrs. Price has spent the winter seasons on the south Atlantic Coast and the rest of the year among the more familiar scenes of the home country, where many relatives and friends seem to vie with each other in doing them honor. Mrs. Price is a native of Clay County, Indiana, and the same age as her husband, having been born in 1836.”

[Chiseled into the granite is a different year of birth for Mrs. Price—1835]

Levi M. PRICE, one of the well-known business men and land owners of Greene County, died at the home of his daughter, Mrs. Clinton P. SHERWOOD, in Linton last Saturday night. He was seventy-four years old and was a pioneer of Stockton Township. Mr. PRICE had the distinction of being one of the first men to mine coal in this section of the country, sinking the old Summit mine on his farm west of Linton about thirty years ago. Through deals in coal lands he became a man of means and had wealth estimated at $60,000. Mr. PRICE was a civil war veteran having enlisted in COMPANY E, FIFTY-NINTH INDIANA {VOLUNTEER} INFANTRY and served until the close of the Civil War. He had been suffering with a fever which is thought to have caused his death. He was a member of the Methodist Episcopal Church where the funeral was held Monday afternoon. Besides his wife he left four children, namely Mrs. E. T. SHERWOOD, Mrs. Peter SCHLOOT, Mrs. C. T. SHERWOOD and I. O. PRICE. The funeral was largely attended. The services were conducted by Rev. F. A. STEELE, Rev. A. N. ELDROD and Rev. HENNINGER. Interment in the new cemetery. Burial under the ritual service of the G. A. R.”

It is clear by the monument built in his honor that his service to his country in the Union Army was one of the seminal events of his life.