The Willow and the Obelisk

Posted on September 17, 2015 by gravelyspeaking 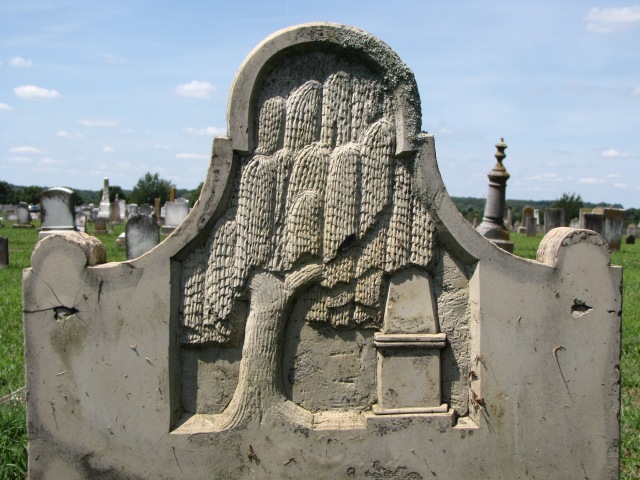 In the Crown Hill Cemetery at Salem, Indiana, there are good many intricately carved limestone gravestones, such as, the one created for Susan Carpenter in 1847. In the top third of her tombstone is a detailed carving of a weeping willow tree that hangs over and obscures part of an obelisk. The carving is fresh and sharp and looks like it could have been carved that day.  The obelisk is a stone shape that is ubiquitous in American cemeteries and part of the Egyptian Revival Period which was inspired by the French and then the British presence in Egypt in the late 18th and early 19th Centuries. The obelisk is said to represent a single ray of sunlight, petrified from sunlight into stone.  It was thought that the Egyptian sung god Ra lived within the obelisks.  These towering monuments were often placed flanking the entrance to temples.

Here the obelisk is combined with the willow, a traditional symbol of morning and grief.  On this gravestone the obelisk seems to become a symbol grief itself—the death of a loved one and where that person is  buried.

The gravestone of Metilda Amsden is also to be found in the Crown Hill Cemetery at Salem. It is slightly different in that the obelisk on this gravestone is flanked by two trees—the willow and a tree with no branches. Here the two trees not only represent sorrow and mourning but the stripped down tree is a stark representation of death.

In the top of the Obelisk in the carving it says, METILDA CONSORT of AMON AMSDEN.  The medallion below the willow and obelisk motif carriers the inscription:

3 Responses to The Willow and the Obelisk