Posted on August 25, 2015 by gravelyspeaking

at the town of DielKirchen

from a mortal wound as a hero

For our country may he rest in peace.

During the Civil War, Americans, North and South, joined to defend their ideals and their region of the country. German immigrants were among the largest immigrant populations that fought in the war. The 32nd Regiment of Indiana Volunteers was an infantry unit, commissioned by Indiana Governor Oliver P. Morton, which was made up of an all-German force. It was also called the 1st German.

Jacob Glass was enlisted in the 1st German and had distinguished himself and risen to the rank of Lieutenant Colonel.  Glass fought in the Battle of Missionary Ridge, a bloody battle. The Union losses totaled 752 killed, 4,713 wounded, and 350 captured or missing compared to the Confederate losses of 361 killed, 2,180 wounded, and 4,146 missing or captured. Even though the Union losses were greater, they won the day and gained control of Eastern Tennessee closing off a key rail line that supplied the Confederate Army.

Glass, who fought and died in the Battle of Missionary Ridge, is buried in the Springdale Cemetery at Madison, Indiana, his remains were returned to his home. His soft white marble tombstone has a medallion on the side that displays the eagle upon a shield backed by three American flags and a field of 23 stars–one for each state that stayed loyal to the Union thrghout the war. The gray patina highlights the bas-relief and makes the sculpture stand out. The medallion is a testament to his patriotism and the service to his adopted country. 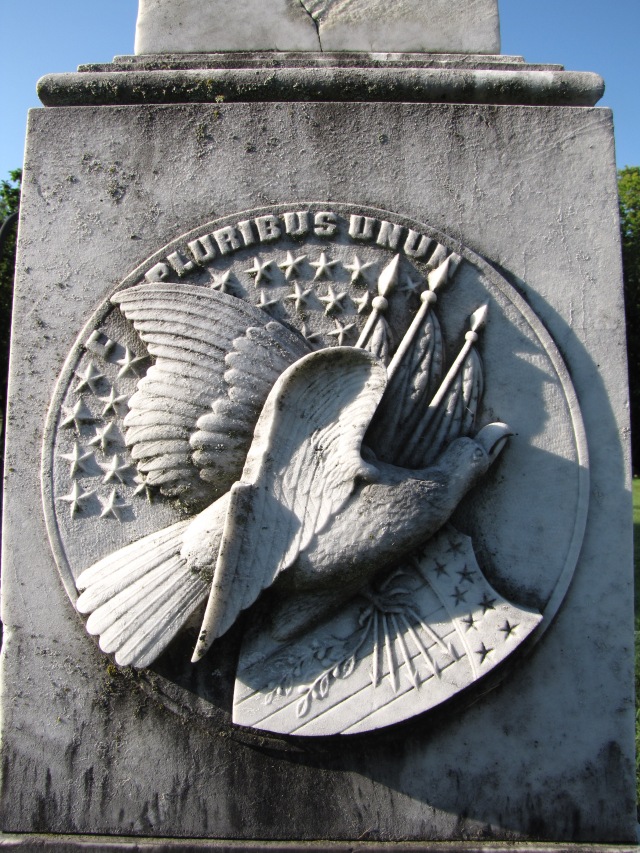