Posted on September 12, 2014 by gravelyspeaking

Many ancient classical designs are replicated in modern graveyards, often in grand neoclassical mausoleums based on the designs of Greek and Roman temples.  Less extravagant examples can be found, too. For example, the sarcophagus of Alexander Moseley in the Mount Auburn Cemetery at Cambridge, Massachusetts, the Wagner Monument in the Lakewood Cemetery at Minneapolis, Minnesota, and the sarcophagus of Conrad and Helen Schweitzer, buried in the Hollywood Forever Cemetery, in Southern California, are both modeled after the Roman tomb of Lucius Cornelius Scipio Barbatus.

The Schweitzer Sarcophagus in the Hollywood Forever Cemetery, Southern California

The Scipio sarcophagus was erected around 150 BC.  Lucius Cornelius Scipio Barbatus (died c. 280 BC) was one of the two elected Roman consuls in 298 BC. His tomb is now preserved in the Vatican Museum in Rome, Italy. It is an example of classical Greek design based on the same design principles used for the Parthenon and described in a trade publication for stone carvers, “Design Hints for Memorial Craftsmen”, November 1928, Volume 5, Number 5, pages 14-16. The magazine was published monthly at St. Cloud, Minnesota, by editor and publisher, Dan B. Haslam.

In an article written for “Design Hints” by John Cargill, a designer from the Chicago design firm of Chas. G. Blake & Company, Cargill described the evolution of the classical architectural design principles, which he writes were conceived from the order that the ancients found in nature, primarily astrological, that were used in Greek architecture to imbue harmony into their structures. 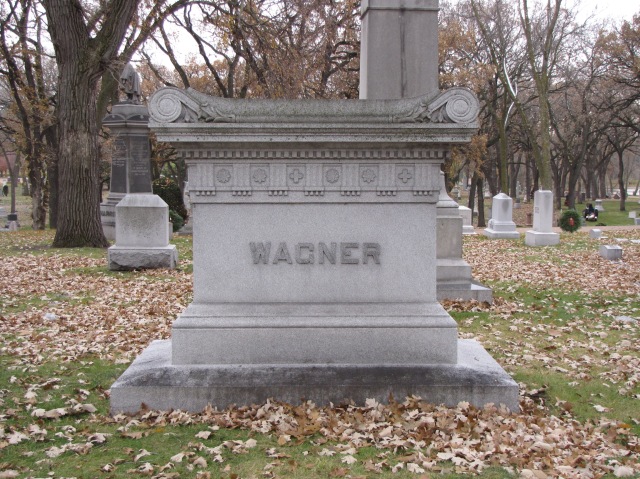 The Wagner Sarcophagus in the Lakewood Cemetery at Minneapolis, Minnesota

In addition, there is much other symbolism embedded on the monument. The triglyphs represent the column found in the Doric architectural order and most likely symbolizes a temple. The rosettes may be symbolic of sun gods. Some of the rosettes also have a cross designed into them. The cross was an ancient symbol adopted long before the Christians adopted it. For the ancients it was a symbol of the sun.

The scroll work, in addition to representing the Heavens, also represented a bed. As Cargill describes it in the article, “the scrolls represent a bed; the bed refers to sleep and sleep is a type of death; and to the righteous death is but glorious transport to Paradise.”

The Scipio Tomb housed in the Vatican Museum at Rome, Italy

The entire booklet can be found at the Quarries and Beyond Website: http://quarriesandbeyond.org/cemeteries_and_monumental_art/cemetery_stones.html.

The Quarries and Beyond Website was created by Peggy B. and Patrick Perazzo. It focuses on historic stone quarries, stone workers and companies, and related subjects such as geology. Whenever possible links of finished products are provided on the Website. There is a “Quarry Articles” section that presents articles, booklets, and links from the late 1800s to early 1900s, including the 1856 “The Marble-Workers’ Manual.” The “Cemetery Stones and Monuments” section provides references and resources, including many old monument magazines, catalogs, price lists, and a photographic tour “From Quarry to Cemetery Monuments.”