Posted on October 5, 2011 by gravelyspeaking

…O paint the gloomy horrors of the tomb;
Th’ appointed place of rendezvous, where all
These travellers meet.–Thy succours I implore,
Eternal King! whose potent arm sustains
The keys of Hell and Death.–The Grave, dread thing!

—By Robert Blair, “The Grave”

Early American graveyards were often in the middle of town. These burial grounds were unorganized and neglected places, with weeds and overgrowth, stones willy nilly, where the dead were buried, sometimes with markers, sometimes not. Often cattle grazed among the gravestones. In William Cullen Bryant’s poem “The Burial Place” he accurately describes the city graveyard:

And melancholy ranks of monuments

Are seen instead, where the coarse grass, between

Shoots up its dull spikes, and in the wind

hisses, and the neglected bramble nigh…

This type of cemetery is the easiest to describe. The name churchyard, in fact, tells the story. The burials took place in the yard around the church and was reserved for members of the congregation. These dot the countryside and can be found in nearly every community. For the most part, churchyards lack to the large monuments and mausoleums that can be found in garden and rural cemeteries and the gravestones tend be more simple forms—tablets, columns, and block markers.

In 1831, Mt. Auburn Cemetery opened in Cambridge, Massachusetts. It was the first garden cemetery to open in the country and represented a new attitude about burying the dead. These cemeteries were designed spaces, with pathways and avenues, and were landscaped to have the look and feel of a public park. In Victorian Cemetery Art, written by Edmund V. Gillon Jr., he writes “The large amounts of space in the Victorian cemetery were to revolutionize cemetery art, and permit the use of sculpture in a way that crowded churchyard had never allowed. Sepulchral sculpture, with it prone effigies and kneeling weepers, had flowered in the past, but only for the rich and powerful.” The opening of Mt. Auburn was the dawning of the rural cemetery movement–the concept of the cemetery as a landscaped space. Cities across America began to open garden cemeteries in their communities—Cave Hill Cemetery in Louisville, Laurel Hill Cemetery in Philadelphia, Spring Grove Cemetery in Cincinnati, Greenwood Cemetery in Brooklyn—to name just a few.

This type of cemetery is really a combination of two types—the garden cemetery and the memorial park. This cemetery has areas for large monuments and mausoleums, as well as, large sections reserved for grass markers. These cemeteries are designed with large avenues and pathways for visitors.

Two of the greatest influences on the design and look of the cemetery in the 20th Century were the cost of labor and the invention of the motorized lawn mower. By designing cemeteries with only grass markers—gravestones that lay flat and level to the ground—groundskeepers could mow large swaths of the cemetery in much less time than it took to push a mower around tombstones and trim the grass growing next to monuments. The improvement in the efficiency of maintaining the cemetery gives way to artistic and expressive aspect of tombstones used to mark the graves of the deceased. 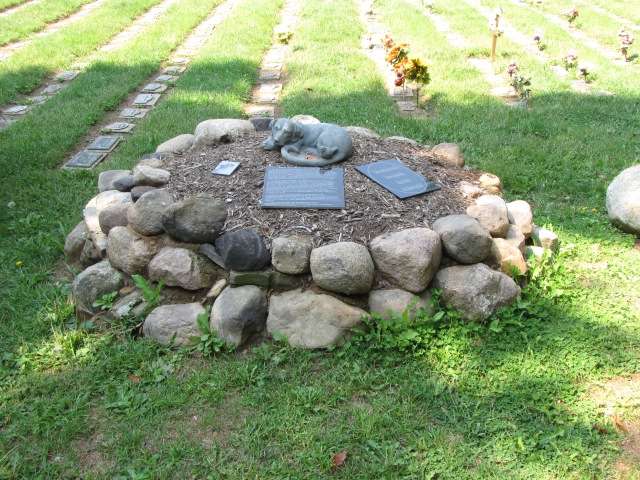 According to Keister, this category of cemeteries includes family cemeteries, as well as, cemeteries that are dedicated to members of secret societies. Some of these would include Masonic, Odd Fellow, and Knights of Pythias cemeteries.  This also includes pet cemeteries, which were established in the United States in the late 19th Century.  In 1896, Veterinarian Dr. Samuel Johnson offered to let his friend bury his beloved dog in his apple orchard. Today more than 70,000 pets are buried in what is now the Hartsdale Canine Cemetery, Hartsdale, New York, which became the first and oldest pet cemetery.  Since that cemetery was founded others have dotted the countryside.

On July 17, 1862, during the Civil War, Congress passed an act that gave the president the power “to purchase cemetery grounds and cause them to be securely enclosed, to be used as a national cemetery for the soldiers who shall die in the service of the country.” That year 14 cemeteries were established:

There are now 146 National Cemeteries in the United States, the most famous being Arlington National Cemetery in Arlington, Virginia, which was created on the grounds of General Robert E. Lee’s ancestral home.

The gravestones found in National Cemeteries are overwhelmingly the segmented-top white marble tablet. These gravestones are 42 inches tall, 4 inches thick, and 13 inches wide. In an article written by Edwin Dethlefsen and Kenneth Jensen, “Social Commentary from the Cemetery”, published in Natural History, June/July 1977, Volume 86, they write, “Another type of gravestone is that provided for veterans by the United States government. This takes the form of a simple granite, marble or bronze tablet and is a specific indicator of what we know to be an important aspect of culture in America—the increasing paternalism of government”.