Posted on August 30, 2011 by gravelyspeaking

The Henry Harrison Getty Mausoleum in the Graceland Cemetery in Chicago was designed for a lumber businessman in 1890 upon the death of his wife, Carrie Eliza, by the architectural firm of Adler and Sullivan. The Sullivan in the firm was Louis Henri Sullivan, one of the greats in the pantheon of American architects.  Sullivan is credited with developing modernism and is known as the “Father of the Skyscraper”.  The phrase “form follows function” is attributed to Sullivan and has become part of our everyday vernacular.

The breakaway mausoleum design has a “strong geometric massing, detailed with original ornamentation.”  According to Robert A. Wright, author of “Poems in Stone: The Tombs of Louis Henri Sullivan” published in Markers V: Journal of the Association for Gravestone Studies, 1988, page 181, Sullivan often used the block in his designs.  The block, Sullivan believed, represented the “aesthetic and symbolic qualities of the male nude form.”  The image with its massiveness and weight conjures up a feeling of masculinity.

As a counter balance to the masculine element of his design, the choice of the soft-colored Bedford limestone and the ornamentation represent the feminine elements of the mausoleum.  As Wright points out in his article, “The finely-carved ornamental pattern of the upper half of the exterior walls also lightens visually the mass of the tomb.  The tomb’s ornament was Sullivan’s vehicle for beautifcation.” 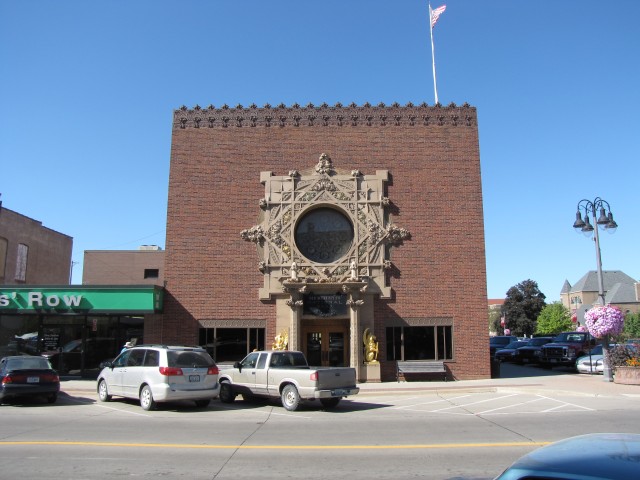 In 1914, the Jewel Box Bank in Grinnell, Iowa, opened.  Many of the same architectural innovations that were found in the Getty Mausoleum can be seen in the bank building, such as the “strong geometric massing, detailed with original ornamentation.”  The massive block is replicated in this design.   As in the mausoleum design, the top of the bank has a repeating design.  The focal point arch is replaced in the bank with the “jewel” above the main entry into the bank which dominates the face of the building.

In spite of the fame and success that Sullivan had enjoyed during much of his career, the last decades of his life were in decline, personally and professionally.  He died on April 14, 1924, estranged from his wife, nearly penniless, and alone.  His friends, including Frank Lloyd Wright, paid for his modest monument.  The Sullivan monument mirrors the ornamentation on the Jewel Box Bank.  The focal point on the large block of granite is the bronze “jewel” in the center with the profile of Louis Sullivan.