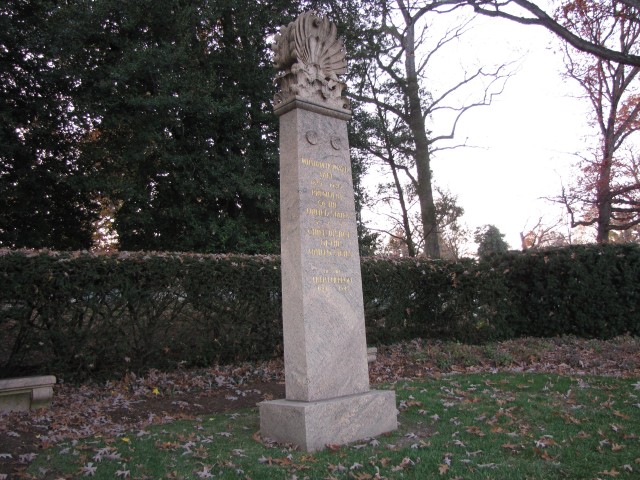 The elegant 14 and a half foot tall Stony Creek granite monument designed by James Earl Frazer marks the graves of United States President William Howard Taft and his wife and First Lady, Helen Herron Taft.  Gold lettering states their names on the marker.  The Greek Stele (stone or wooden slab generally taller than it is wide and designed as a funeral commemorative) is topped with a acroterion motif–a stylized palm leaf, that can be found on classical Roman and Greek architecture.  This motif has its origins in Egyptian art and architecture.

Taft was born into a prominent family of Ohio politicians, and was an accomplished public servant who honorably served the country for over 50 years; the only person in American history to serve in the two most powerful postions in the United States government, as president and as Chief Justice of the Supreme Court.

In today’s image conscious world it is hard to imagine that Taft could be elected president.  Taft sported a bushy walrus mustache and his 6-foot frame tipped the scales at over 300 jiggling pounds!  A story that was told of Taft that poked fun at his tonnage was told of him when he was Governor General of the Philippines.  Taft had been reportedly under the weather when Elihu Root, Secretary of War, telegraphed to ask about his condition.  Taft telegraphed back to say that not only was he feeling better, but he had just finished a 25-mile horse ride.  Root telegraphed back to ask, “How’s the horse?”