Tribute to a Fisherman 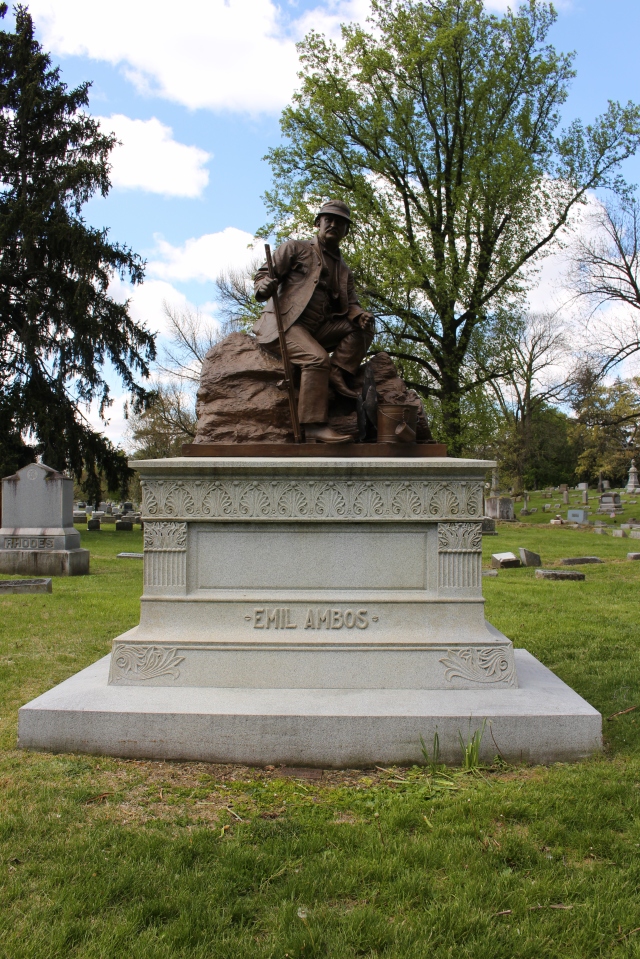 Along one of the winding avenues in the serene and park-like Green Lawn Cemetery in Columbus, Ohio, is the statue of Emil Ambos, a well-regarded and celebrated bon vivant in his day.  Emil Louis Ambos was the son of Peter and Dorothea (Jaeger) Ambos.  Peter was a German immigrant who prospered and built a fortune as a restaurateur and chocolate confectioner, eventually going into banking, as well.  Dorothea’s family were large and owners and owned much of the land in what is now known as Germantown in Columbus.

Emil and his siblings grew up in luxury and in time inherited the family fortune.  Emil also was a success as a saloon keeper and liquor wholesaler but made the decision to retire at the ripe old age of 39, so he could spend more time following his true passions—philanthropy and fishing.  Emil donated money to the Columbus area orphanages.  But he also took a personal interest in the children—making sure that poor children had winter coats and often inviting them to his home for lavish Christmas dinners.  Often he could be seen with several children heading to a pond with him on an afternoon fishing trip. 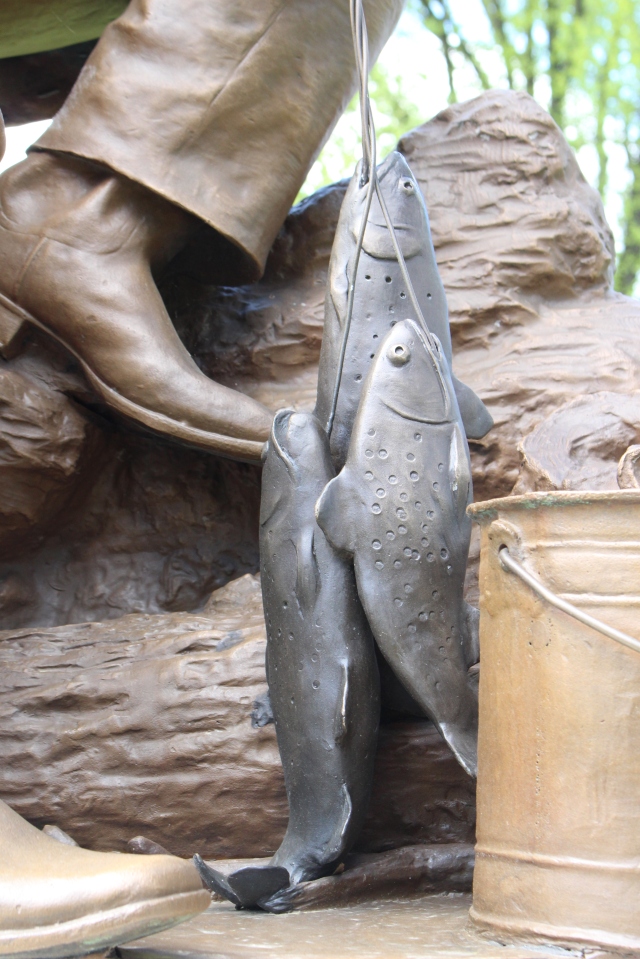 When Emil died in 1898, he left a quirky will that satisfied both of his passions—money for orphans and $5,000 set aside for a monument to be erected over his grave that “shall be enduring, attractive, creditable and first class in all respects.” It should be, he wrote, a “life size figure of myself in fishing costume, according to a photograph taken by L.M. Baker about three or four years ago.”  John Francis Brines, a well-known sculptor from Westerly, Rhode Island, was commissioned to create a bronze statue of Emil Ambos for his monument, which was completed in 1901.

A survey document of important sculptures in the Green Lawn Cemetery by the Smithsonian described the bronze statue: “This life-sized sculpture of a mustachioed Emil Ambos depicts him sitting on a rock and wearing a coat, vest, dress shirt with a bow tie, boots, and a fishing hat. In his right hand he holds a fly rod that may appear to be broken but is actually supposed to be that way to represent it as being partially un-joined. In his left hand he holds a stringer that originally held two small mouth bass; however, one was stolen years ago so only one fish remains. Near his left foot is bait bucket with a small cup or can hanging from it. The statue is set in a way that makes it appear that Emil is looking out over a pond in the cemetery.”

The foundry manufactured architectural pieces, such as bronze doors, for the Boston Public Library, the Library of Congress, and the United States Capitol building, as well as, sculptural pieces, such as, the tigers in front of Nassau Hall at Princeton University.

In 2019, the Smithsonian designated the statue as historically significant but in danger.  The bronze had turned green and the bronze was slowly deteriorating.  On top of that, vandals had shot the statue of Emil Ambos in the head and the fish he was holding had been stolen.  The cemetery trustees reached out to Mike Major of Urbana to restore Emil’s statue, an effort costing a whopping $30,000 and more than two and a half months of painstaking and tedious work.  Now, the statue of Emil can look out amid the gravestones of Green Lawn as a reminder of one of his passions—fishing.

NOTE: The JNO. Williams advertisements were all from an industry publication, The Monumental News, and were researched and provided by Peggy Perazzo who shares her vast collection of gravestone catalogs and resources at her Website: http://quarriesandbeyond.org/cemeteries_and_monumental_art/cemetery_stones.html.

The Quarries and Beyond Website was created by Peggy B. and Patrick Perazzo. It focuses on historic stone quarries, stone workers and companies, and related subjects such as geology. Whenever possible links of finished products are provided on the Website. There is a “Quarry Articles” section that presents articles, booklets, and links from the late 1800s to early 1900s, including the 1856 “The Marble-Workers’ Manual.” The “Cemetery Stones and Monuments” section provides references and resources, including many old monument magazines, catalogs, price lists, and a photographic tour “From Quarry to Cemetery Monuments.

This entry was posted in Artists. Bookmark the permalink.

3 Responses to Tribute to a Fisherman