Sarcophagus tombs are designed to look like coffins.  Most often they are set on a platform or a base.  The tomb is often embellished with ornamentation and nearly always has feet–but the “coffin” is empty–just an empty symbol of the receptacle.  This style of burial monument is ancient.

The word, sarcophagus, is derived from two ancient Greek words, sarx, which meant flesh and phagein meaning to eat.  The two words together, sarkophagus, meant flesh eating.  The term came from the limestone used by the ancient Greeks to bury the dead which was thought to decompose the flesh of the deceased.

The sarcophagi shown here are from the Mt. Auburn Cemetery at Cambridge, Massachusetts.

The John Adams Blanchard sarcophagus features four winged cherubs, two on each side, embellish the footed tomb.  The winged cherub was a symbol that became popular in the 18th Century.  Winged cherubs replaced the stark and morbid flying death’s heads from our Puritan forefathers.  The cherubs have a childlike countenance of innocence.  The iconography represents the flight of the soul from the body upward to Heaven and the hope of the resurrection.

Carved on top of the William and Lucy Howard Brown white marble sarcophagus is a great shock of wheat. Wheat’s origins are unknown but is the basis of basic food and a staple in many cultures. Because of wheat’s exalted position as a mainstay foodstuff, it is viewed as a gift from Heaven. Wheat symbolizes immortality and resurrection.  But, like many symbols found on gravestones, they can have more than one meaning.  For instance, because wheat is the main ingredient of bread, the sheaf of wheat can represent the Body of Christ.  Wheat can also represent a long life, usually more than three score and ten, or seventy years. 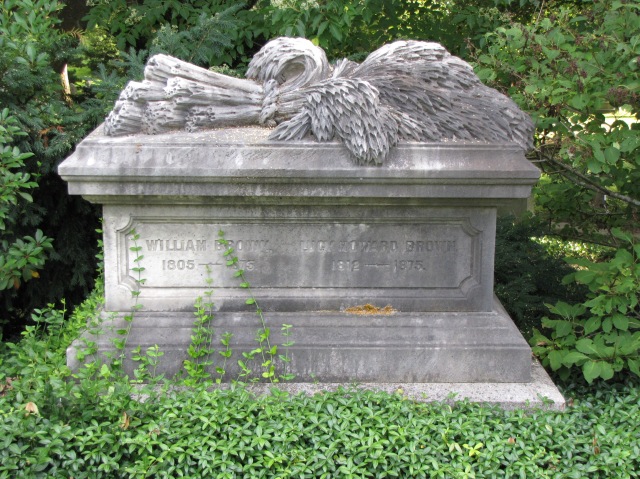 This sarcophagus was erected by the students of Professor John Hooker Ashmun, a testament to his connection to his teaching ability and personality. The tomb rests upon four lion’s feet, giving it an imposing feel.

This white marble sarcophagus was built for Waldo Merriam, a soldier who was killed in a battle. The top of the monument features the soldier’s hat and sword.